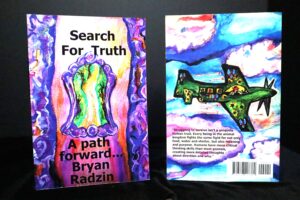 “Search For Truth: A Path Forward…”

Bryan Radzin’s compelling new story, “A Path Forward”, is the fifth novel in his “Search For Truth” series. The narrative explores the human spirit’s polarities, with a focus on truth, accountability, manipulation, humanism versus lies, and unconscionable viciousness. The inhumane Julie Bond and D.J. Bannon rule the United States, by turning the American experiment into an overt and ruthless killing machine, through promoting their own brand of toxic narcissism, as the only path forward. In opposition are the Truth Seekers, divergent characters intent upon spreading unrelenting positivity. Their accomplishments are multidimensional and their risks seem insurmountable. Jason and Christina develop a more profound connection with their fathers, as they and their comrades span the globe, each with their own special skills to move the Truth Seeker’s cause forward. The epiphany of unchecked violent activity, was the collective 2×4 moment, complacent and apathetic masses needed to inspire change. The paradigm shift toward critical mass, is the catalyst for real humanistic change, on a path toward a new day.

Excerpts from “Search For Truth: A Path Forward”

“Struggling to survive isn’t a uniquely human trait. Every being in the animal kingdom fights the same fight for not only food, water and shelter, but also meaning and purpose. Humans have more critical thinking skills than most animals, creating more detailed thoughts about direction and why.”

“If the super free market, Laissez Faire wet dream of Milton Freidman was never fully realized, (because Americans didn’t want their rights taken away) then Julie Bond was ready to make it work by any means necessary. She figured once the entire world’s population was riddled with hate and violence toward each other, she could institute the extreme measures even the most hardened crazies thought were crazy. To call Christina’s mom insane was an understatement, infantile descriptions didn’t do her justice. To call her an evil genius, gave her too much credit.”

“Whether the enemy of an enemy is a friend, or a friend of a friend is an enemy, when lines are blurred, everything is up for grabs. Was that what the population needed? Since the argument could be made America has never fully lived up to it’s creed, did the cliché of kicking the can down the road start at 1600 Pennsylvania Ave? Was that can the American dream?”

“The United States of America had always been a melting pot, a place immigrants could enjoy the sweet taste of freedom. Sometimes this sweetness was created by adding more sugar or salt, because leaders needed to even out flavor profiles. The last thing they wanted, was to be seen as having bad taste by their constituents, or their campaign contributors.”