Search For Truth Series:
Journey into the abyss…
The next step…
The seeker begins..

Action manifesto of a madman for good

Another Manifesto of a Madman for Good

Manifesto of a madman for good 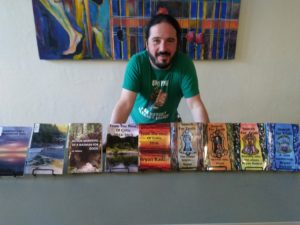 Setting goals comes easy for most folks, but accomplishing them is another thing altogether.

Bryan Radzin, a graduate of Humboldt State University and local resident has accomplished his goal of publishing a book each year by his birthday in July.

For nine consecutive years, this goal has been successfully met.
Radzin’s first three books were precursors to his debut novel, “Search for Truth…The Seeker Begins”  and his latest book titled  “Search for Truth…A new day”, provides a vision of unity through critical mass, while illuminating the illusion of power; so once our new day is built, we can move forward within it. The seventh novel is currently in the working stages, due out fall 2020.

He is participating monthly (first Friday of the month in June-Oct) at the Trinidad Art Festival by the Lighthouse restaurant. He is also the Westhaven Center for the Arts writer in residence for 2019/2020.

His riveting novels weave accountability, humanism and truth throughout.
It blends real issues with a philosophical/spiritual approach to uncover Truths.
It is a synchronistic journey into the realm of politics and what makes us human.

An excerpt from the start of the series “The Seeker Begins…” reveals that: “Our minds and thoughts are like nuclear bombs. When we drop them, I mean really let go and drop them on something that allows them to flow freely, there is nothing more powerful on earth, not the toughest armies or biggest guns. If a pen is mightier than the sword, then the mind and thoughts are the ink that goes into the pen. And if we don’t spend time to gather the best quality ink, we’ll drop a dud when we try to help the world consciously evolve.”

An excerpt from “The Next Step…”, describes the flavor of Cuba: “Succulent Cuban pork and boisterous 55 Chevys backfiring provided smells and sounds so thick you could cut it with a knife. The buildings looked like something out of an old movie, where time never caught up and the whole city was on hold. This is what Jason and Christina experienced when they walked down the streets of Havana for the first time. Both of them had been out of the United States a few times, but this was the start of a whole new adventure, and they both could feel it.”

An excerpt from the, “Journey Into the Abyss…”,  begins with this rich description: “Overpriced private soldiers and under-satiated militias’ battled pink and orange sunrises for control of Jason’s mind, as it searched for a thought he could cling to. His mind never fired quickly when he woke up, half in reality and half stuck in the dream world were where his days usually started. This was no ordinary mind racing marathon the average insomniac put themselves through, it was a feeling stronger than 1000 men; or maybe 2000 depending on how long Jason obsessed about it. The only thought that stuck as he flung the 500 thread count sheets off his listless body, was how strong he was going to make the morning coffee.”