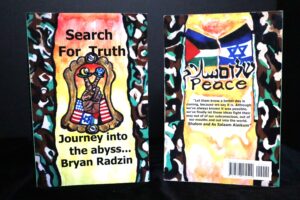 “Search For Truth: Journey Into The Abyss…”

Jason and Christina follow many forced and unforced synchronicities into the unknown, during Bryan Radzin’s third novel in his “Search For Truth Series”, “Journey Into The Abyss.” One abduction leads to another, which leads to Jerusalem and the heart of a thousand year old conflict. Old enemies, new friends, humorous respites and many unexpected experiences peer into the soul of who we are, making Jason and Christina’s synchronistic mission very relatable. This latest chapter in the “Search For Truth” saga, is sure to raise many questions we’ve been collectively avoiding for some time, but whose answers are extremely easy to understand, if we finally allow ourselves to listen.

Excerpts From, “Search For Truth: A Journey Into The Abyss…”

“Overpriced private soldiers and under-satiated militias’ battled pink and orange sunrises for control of Jason’s mind, as it searched for a thought he could cling to. His mind never fired quickly when he woke up, half in reality and half stuck in the dream world were where his days usually began. This was no ordinary mind racing marathon the average insomniac put themselves through, it was a feeling stronger than 1000 men; or maybe 2000 depending on how long Jason obsessed about it. The only thought that stuck as he flung the 500 thread count sheets off his listless body, was how strong he was going to make the morning coffee.”

“Let them know a better day is coming, because we say it is. Although we’ve always known it was possible, we’ve finally let those ideas fight their way out of our subconscious, out of our mouths and out into the world. Shalom and Salaam Alaikum.”

“The epicenter of the most ingrained conflict in human history, always had surprises up its latke and olive oil stained sleeve. The root of many generational battles, was and is utilized as an excuse by radicals to fight their own fights, and commit their own atrocities. When the world is extremely volatile, the little things are catalysts for change.”

“When the Jews thought they found the answer to protecting their people, it only grew more extremists; making the problem infinitely worse. Jason knew the old mantra many Jews lived of “never again”, was causing them to slowly become what they had been fighting against. If Jason had a chance to upend that paradigm, then he’d take it without a second thought. He’d show that when Jews and Palestinians treat each other like human beings, most of their problems cease to exist.”