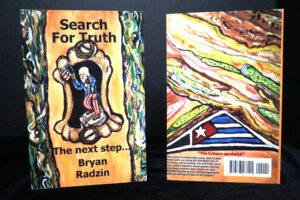 “Search For Truth: The Next Step…”

“The Next Step” is the second novel in the “Search For Truth” series’ synchronistic journey into the heart of politics and what makes us human. Both “The Seeker Begins” and it’s sequel, “The Next Step”, are written from the viewpoint of a journalist willing to risk his life for the Truth. This compelling novel originates in Cuba, where Jason and Christina uncover a global scheme to control the earth’s shrinking water supply. Adventure and near death experiences bring accountability, truth and humanism to the story. Evolving solutions to worldwide drought are addressed and implemented through many different alliances, each with varying agendas. The plot twists and turns and leaves the reader on the edge of their seat. The journey continues to the heart of “motor city” Detroit, where Jason and Christina follow leads that will either benefit, or damage collective humanity. Rich character development and numerous surprises, provide the reader a glimpse into the mentality of people in power. “The Next Step” was written to deepen our understanding of how crucial seeking the truth really is. We must never let bread and circuses have control over us.

Excerpts from, “Search For Truth: The Next Step…”

“Succulent Cuban pork and boisterous 55 Chevys backfiring, provided smells and sounds so thick you could cut them with a knife. The buildings appeared like something out of an old movie, where time never caught up and the whole city was on hold. This is what Jason and Christina experienced when they walked through the streets of Havana for the first time. Both of them had been out of the United States a few times, but this was the beginning of a whole new adventure, and they both could feel it.”

“The smell of unbelievably juicy, melt in your mouth pork can bring the strongest man to his knees. Not to mention the perfectly cured ham, the yellow mustard, the sliced pickles and the ooey gooey melted swiss cheese on that perfectly toasted bread, coming together to bring an ecstasy of taste to the tongue. It’s a great thing to have the most amazing sandwich on the planet, in the birthplace of the people that came up with it, but only after immigrating to another country. Crazy world we live in.”

“Rampant unemployment causes a drain on natural resources, because the infrastructure keeping it affordable is gone. The companies say that if they took control of power and water systems, they could streamline its delivery to the people; not admitting the profit they’d make hand over fist. ”

“Maybe we need some kind of technology to save us. It’s true that technology is partially responsible for the downfall of society, by making everything impersonal; but we can also use  technological breakthroughs to advance society. Some people say the road to hell is paved with good intentions. Without good intentions however, a person will never know what the right course of action is.”