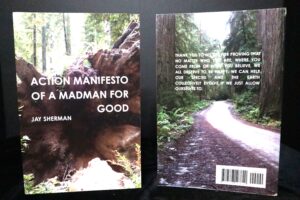 “Action Manifesto For A Madman For Good”

“Manifesto of a Madman for Good”, “Another Manifesto of a Madman for Good”, and “Action Manifesto of a Madman for Good” is a series of collection books written by Bryan Radzin, under the pseudonym, Jay Sherman. They were the brainchild for his “Search For Truth” novel series that followed, in which Jay Sherman appears as a character in the second book, “The Next Step”. Searching for his own truth, the Manifesto series was written in journal form, helping Bryan express the spiritual, philosophical and emotional nature of humanity, with unrelenting positivity. Searching for meaning in his daily entries, the reader will grasp the importance of living life as authentically as possible, and how empathetic kindness toward themselves and the world, is the key to collective healing.

Excerpts from, “Action Manifesto Of A Madman For Good”

“If more of us believe we can make positive change, more of us will. Our numbers will grow so large with critically pondered, universal human truth, that the whole system designed to make us blind, dumb and full will fall apart. Similar to how advertisements disappear when we don’t faithfully pay attention to them, so too will tyrannical governmental and corporate systems.”

“Thank you to my life for proving that no matter who you are, where you come from, or what you believe, we all deserve to be happy. We can help our species and earth collectively evolve, simply by allowing ourselves to.”

‘The issues we deal with on a daily basis, magnify greatly when we reach elected office. War and corruption exists in political and business leaders, because it exists in us. We must help ourselves, so we can help the world.”

“We as humans have experienced depressions in many forms since we started walking upright, like we’re all part of the same cycle. We break that cycle by demanding enough is enough, and continuously proving we aren’t going to be taken advantage of.”