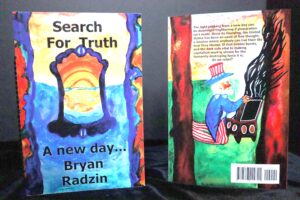 “Search For Truth: A New Day…”

In the sixth novel of Bryan Radzin’s “Search For Truth” series, ”A New Day” , a group of 10 very different people continue their quest, for a more humane and fair government. They are the Truth Seekers, and through critical mass based on shared humanity, forge the demise of the previously violent and abusive administration, led by the mother of a Truth Seekers’ cofounder. With the future unknown, the team trudges forward to reestablish the ideals of a free society. “A New Day” is filled with complex twists and turns, making truth, humanism, and accountability permeate the story. This novel depicts a hopeful future, in spite of many attempts to sabotage the Truth Seekers bringing ALL American people into “A New Day”.

Excerpts from: “Search For Truth: A New Day”

“The light peaking from a new day, can be downright frightening if preparation isn’t made. Since its founding, the United States has been an oasis of free thought, a bastion where anybody can live their life how they choose. If that bubble burst however, and the dark side vital to making capitalism work, is shown for the humanity destroying force it is, many questions appear. Do we rebel? Do we stage a coup? Do we gather so many people it overwhelms the powers that be, who’s only choice is complete and utter surrender?”

“Our path forward to unification is hard, but easy at the same time. How many times have we said that before? It’s easy because it resides in the golden rule, treating others like we’d like to be treated, don’t piss in the sand box, and remember to share. This might sound childish, but if we utilized this same powerful advice as adults, we utilized as kids, we wouldn’t have half the problems we do.”

“This new day is why we find a find a path forward. We need a destination to work toward, a goal that keeps us motivated to keep grinding when times get tough. We just can’t get so hung up on outcomes, we ignore signs of a new day. The first step is finding our light, the second, is illuminating our path forward by uniting around common humanity.”

“Revolutions never end, they continually evolve. People who push massive change in societal structure, know what they’re doing, hell, they want authentic freedom. Problems mutate when integral members of people powered revolutions, begin governing. This is their ultimate goal, but quickly unearth the uncomfortable fact, that people will rebel against them, specifically because they are now the power.”