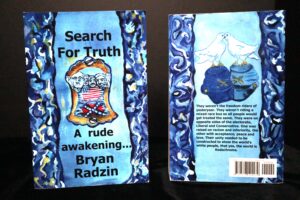 “Search For Truth: A Rude Awakening…”

The “Search For Truth” series continues with the fourth novel, “A Rude Awakening”. The politically synchronistic journey slogs forward, after Christina is poisoned and taken to the hospital, she’s abducted and made to become patient zero, in a dehumanizing scheme to take over the world. A new government is erected in the heart of the old south, by ushering peoples’ primal instincts through a new wonder drug. “The Entities” believe by releasing generational racism and hate on a massive scale, people will kill each other off so they don’t have to. The loyal soldiers who remain, would then become perfect worker bees in Entity factories and fields. The hidden monster that has been brewing under the surface since Civil Rights, will destroy collective evolution, if not for Jason, Christina, and their band of conscious Truth Seekers.

Excerpts From, “Search For Truth: A Rude Awakening…”

“They weren’t the freedom fighters of yesteryear. They weren’t riding a mixed race bus so all people would get treated the same. They were on opposite sides of the electorate, Liberal and Conservative. One was raised on racism on inferiority, the other with acceptance, peace and love. Their unity needed to be constructed to show the world’s white people, that yes, the world is Kodachrome.”

“Past attempts of upsetting the status quo, have shown the extreme difficulty of sustaining the energy required. Monumental courage and stamina are needed to take a stand. Love and unity keep us standing, against what has been ingrained since the beginning of time.”

“The stars and bars were a rallying cry of a bygone generation. The fact that the symbol inexplicably returned in defiance of expanding human rights, would make the founders roll over in their graves. Well, not roll in their graves, as much as wonder if the defiance evolved from them.”

“The soul of the American experiment had been hanging in the balance, since people at the top realized they couldn’t control the masses. Would all those immigrants with their different beliefs and different clothes, change the American dream? Did the elites feel their iron grip of control slipping after thousands of years? Would the poor finally rise up?”