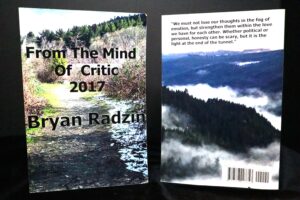 This is the third of many collections “From the Mind Of Critic.” The short essays can be flipped through randomly, or read in succession. They run the gamut of human emotions from love, to hate, to fear. Along with a healthy dose of politics, humanism, unity, accountability and truth, this collection will hopefully stir the pot just enough to start conversations. For if we simply talk to each other like human beings, we’d find that many of our generational issues can be solved. Emotions soften when fog lifts, making us realize we agree on a lot more than we disagree. We just need to get out of our own way, and remember, everything we need to know we learned in kindergarten.

“We must not lose our thoughts in the fog of emotion, but strengthen them within the love we have for each other. Whether political or personal, honesty can be scary, but it’s the light at the end of the tunnel.”

“We all go through dark tunnels, knowing we must trudge through to reach light at the end. We might not be able to force slivers of light along our journey to combine, but we can make them more frequent, by recognizing them and letting them go. Darkness may feel so overpowering it seems destined to engulf everything good and just. This is an illusion, which will be vivisected once we allow our personal roadblocks to crumble under the world’s beauty.”

“Once we realize we’re happier, more prosperous and more productive when all of us are, we’ll see dividing people into different groups because they believe differently, doesn’t mean they’re threatening us, it means we’re threatening ourselves. One plus one does equal one, when we see ourselves as equals. This isn’t math, it’s the future construct of our species.”

“We might feel like an outsider, where others listen and then do whatever they were going to do anyway. It can’t stop us. We must keep getting involved, standing up and demanding our voices be heard. We might be outsiders, but it’s the outsiders who show the insiders they aren’t who they claim to be.”